This is the third part in series of introduction about Hindu Icons and Symbols - this time we will study in detail about the Devi Mā - Divine Mother, the feminine counterparts of great Devas - Brahma, Vishnu and Shiva.

The Consorts of the Trinity

The Śakti of Brahma, represented as both his daughter and his consort, is the goddess of speech, the Flowing-One (Saras-vati). She represents the union of power and intelligence from which organized creation arises.

Speech is the power through which knowledge expresses itself in action. Sarasvatī is the source of "Sonic-creation". Creation or rather "Projection" of the universe occurs in two parallel processes — creation through sound (nāma) and the projection of forms (rūpa).

She is the goddess of eloquence, of all forms of knowledge, the patroness of the arts and of music. She is the source of all communication through language and writing. She is the power that resides within all poetry and writing. 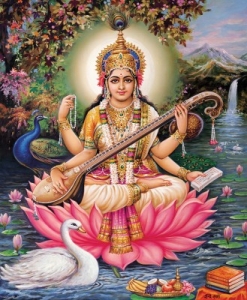 The name Sarasvatī is that of a sacred river, mentioned in the Rig Veda as: — "She who goes pure from the mountains as far as the sea." This river dried up about 2000 years ago and the course can now be seen from space. According to the Mahābhārata, the river was dried up by the curse of the sage Utathya.

Saras, which means fluid, refers to anything that flows and as such applies to speech and thought as well as water. Other names of Sarasvatī are Eloquence (Bhāratī), Transcendent Knowledge (Mahā-vidyā), Speech (Vāc), Transcendent-Word (Mahā-vāṇi).

Pustaka (Book) - The sacred Scriptures and all forms of book learning and theoretical knowledge. In the modern context it would include computers and all other forms of visual and sound media as well.

Japa-mālā (Rosary) - Spiritual practice. Meditation and the recitation of mantras.

Vīnā (Lute) - Music, singing, dancing. Inner sound of spiritual harmony; the vibration of the atoms in motion, creation, the sound of the spheres, the harmony of all the diffuse elements of the cosmos.

The Śakti of the all-pervading Preserver, Vishnu, is represented as the power of multiplicity or goddess of fortune, "She-of-the-Hundred-Thousands" (Lakṣmī). When she is associated with the universal principle of beauty she is known as Śrī.

Both "Lakshmi" and "Śrī" are mentioned in the Vedas in the context of "fortune." But Lakshmi as the Goddess of Fortune is depicted as a major goddess only in the epics.

The Śatapatha Brāhmaṇa describes Hrī — Beauty as born from the lord-of-progeny (Prajāpati). Beauty is also the mother of Lust (Kāma). When the ocean was churned by the gods and the anti- gods, Lakshmi arose from the waves, a lotus in her hand.

The Vishnu Purāṇa says that Śrī — Fortune was first born as a daughter of the Crack-of-the- Ritual-Fire (Bhṛgu) united to the Hymns-of-Praise (Khyāti). Fortune is thus the fruit of the ritual- sacrifice (yajña).

As the consort of the Highest God Lord Vishnu, Lakshmi is also the embodiment of compassion (anugraha-śakti) and tempers His quality of Justice (nigraha-śakti). As the Goddess of compassion she further transforms and sanctifies resources into their use for the benefit of others.

Lakshmi also has a sister — Misfortune (A- laksmi), fearful and ugly, also known as the Elder- Sister (Jyeṣṭhā).

By reproducing from its own matrix rather than the soil the lotus is a symbol of spontaneous generation (Svāyambhu). It grows in mud but rises in immaculate purity to the surface and opens to the sun - the evolution begins in the mire of Samsāra but rises to full enlightenment and purity.

The lotus is the quintessential symbol of purity and enlightenment. The closed lotus is a symbol of potential and the open the symbol of actualization.

She is usually depicted seated upon a lotus - representing the enlightened and pure mind. Her two lower hands are held in the gesture of fearlessness (Abhayā) granting freedom for fear and suffering to all beings, and the gesture of generosity (Varadā).

A rarer form of Lakshmi is known as Vīra-Lakshmi or "Heroic-Lakshmi" — in which she displays all the qualities necessary for a pro-active social and spiritual involvement. Envisaged in a cosmic form as the Transcendent-Fortune (Mahā-Lakṣmī) — the power of progress, accumulation and advancement she embodies the characters of all the gods together.

She is seated on the "Lion-Throne" of universal dominance, in her upper hands she holds the symbols of Vishnu her consort — the conch and the discus — symbols of creation and transformation respectively.

The next two hands down hold the bow and moon- shaped arrow symbolic of the mind and its application single-mindedly to the objective being contemplated.

The lowest 2 hands are held in the gestures of fearlessness and generosity.

The Powers of Procreation, Development, & Destruction.

Pārvatī is a gentle benevolent goddess, daughter of the axial mountain — the Himalaya, from which the earth energy radiates into space. The mountain (parvata) or the Snow-capped-One (Himavat) is a symbol of ether — Ākāśa.

The peaks of the mountains are regarded as the places from which the earth energy flows into the ether. No dwellings are built on top of mountains and hills and only places of worship may be built there.

The mother of Pārvatī is Menakā, who represents intellect (buddhi). Born of Ether and Intellect, Pārvatī is the omnipresent conscious substance of the universe.

Pārvatī is also the matron of all the elemental spirits — the bhūtas and gaṇas (categories) that wander about the earth.

The Divine nature in Tantra is often conceived of as a playful young boy or girl, aged sixteen, full of vitality, energy and procreative desire, a playful being for whom the whole world is a toy, a the whole of life a game.

The Divine Playfulness is personified either as Krishna or as a manifestation of Pārvatī known as Lalitā. She holds the Pāśa, Ankuśa and a sugar-cane bow with which she shoots the five arrows of the sense-objects. 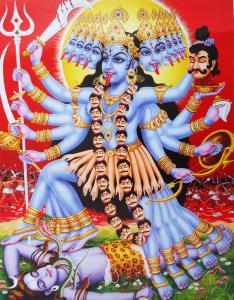 Sometimes the Goddess is shown alone in which case she is depicted as Maheśvarī — the feminine counterpart of Lord Maheśvara.

The agency of Śiva’s procreation is the Goddess known as Power-of-Lust (Rati) — the wife of Kāma-deva. Without sexual desire no conception takes place. She appears to be the very opposite of the power of destruction — Kālī, the Power-of-Time.

When Śakti, which is also the power-to-think (Vimarśa), unites with the lord-of-sleep, a state of agitation, or unrest (unmana) arises, from which projection of the universe springs forth.

When Śakti separates herself and remains aloof from him, a state of perfect quiescence or harmonization occurs (samana), in which the world dissolves.

The Goddess Rati is the libido — the ubiquitous force of lust, of enjoyment, but strangely enough also the power of liberation — for liberation from the bonds of material nature is not a passive or a neutral state but indeed an very pro-active struggle.

One of the most popular forms of the Goddess who is worshipped alone and has many temples and shrines dedicated to her is Durgā.

Durgā's feminine power contains the combined energies of all the gods. Each of her weapons was given to her by the various gods: Rudra's trident, Vishnu's discus, Indra's thunderbolt, Brahma's Kamaṇḍalu, etc. etc.

According to a narrative in the Devi Māhātmya, Durgā appeared as a warrior goddess to fight an Asura (an anti- god) named Mahiṣāsura or ’buffalo-demon’.

He had unleashed a reign of terror on earth, heaven and the nether worlds, and he could not be defeated by any man or god, according to a boon given him by Brahmā.

The gods went to entreat the aid of Lord Viṣṇu. Hearing of Mahiṣāsura’s atrocities, Vishnu, Shiva and all of the gods became very angry and beams of fierce light emerged from their bodies.

She introduced herself in the language of the Rig-Veda, saying she was the form of the supreme Brahman who had created all the gods. Now she had come to fight the demon to save the gods.

They did not create her; it was her divine Līlā she emerged from their combined energy — she represents the totality of our higher potential for Self-realization.

Mahiṣāsura or the buffalo-demon represents the gross negative aspect of Tamas which obstructs and thwarts spiritual progress. As the personification of the Tāmasic Ahaṁkāra — he constantly and adroitly changes shape whenever he is confronted by Durgā.

We have the incredible capacity for self-delusion and whenever we are confronted we always manage to work our way out and somehow or other justify our actions both to ourselves and to others.

But finally, once we have exhausted all our excuses and self-delusions we are finally vanquished by our higher nature and experience the bliss of Ātma-bodha — self-realization.

The Names of the Goddess

Like-a-Bee (Bhrāmarī), she is Śiva 's- Messenger (Śiva -Dūtī). She is the Goddess Beyond-Reach (Durgā), the Endless (Ananta), the Everlasting (Nitya).