The blind men asked, ‘What is the elephant like?’ and they began to touch its body.

One of them said: 'It is like a pillar.' This blind man had only touched its leg.

Another man said, ‘The elephant is like a husking basket.’ This person had only touched its ears.

Similarly, he who touched its trunk or its belly talked of it differently.

In the same way, he who has seen the Lord in a particular way limits the Lord to that alone and thinks that He is nothing else.

Shri Ramakrishna was born on February 18, 1836 in the village Kamarpukur, located about sixty miles north-west from Kolkata. His parents – Kshudiram Chhattopadhya and Chandramani Devi – were poor but very pious and righteous people. Ramakrishna as a child (his name than was Gadadhar) was very loved by people of his village. From his earliest days Ramakrishna didn’t felt much inclination towards school studies or mundane affairs. However, he was very talented boy, loved to sing and paint. He loved to serve to holy people and listen their talks. Often he was seen immersed in deep spiritual states. At age of six he first entered the state of spiritual bliss. It took place while he was watching a flock of white cranes flying in the sky covered with black clouds. During the time his tendency to experience ecstatic states became stronger. When he was seven, his father died, and it led him towards even more self-inquiry and reduced his attachment to the world.

A priest in the temple of Dakshineshvar

When Shri Ramakrishna was sixteen years old, his brother Ramkumar took him with him to Kolkata, expecting Ramakrishna would help him to perform duties of the priest. In 1855 Kali temple in Dakshineshwar, built by Rani Rasmani, was consecrated and Ramkumar became its chief priest. However, Ramkumar died just a few months later and young Ramakrishna was appointed to his position. A very intense devotion towards Mother Kali awakened in Ramakrishna; he was spending many hours in front of Her image in loving adoration, often forgetting about his direct duties to perform rituals. His faithful dedication resulted in vision of Mother Kali as boundless radiance, flooding all around him.

The state of intense immersion in God, in which Shri Ramakrishna was living, made surprised his relatives in Kamarpukur and they organized a marriage for him with a girl from neighbouring village Jairambati, named Saradamani. But it didn’t had much impression to Ramakrishna himself, he was immersed in even more intensive spiritual practices. Great desire to experience different manifestations of God was burning him, and, with assistance of several Guru, he was practicing several paths, prescribed in Hindu scriptures, and within each path he reached God. His first teacher, who arrived in Dakshineshwar, was a remarkable woman Bhairavi Brahmani – spiritually advanced practitioner well versed in scriptures. With her help Shri Ramakrishna was practicing different difficult disciplines of the tantric path and succeeded in each of them. Three years later a travelling monk Totapuri arrived in Dakshineshwar. Under his guidance Shri Ramakrishna reached nirvikalpa samadhi – the highest spiritual state mentioned in the holy scriptures of Hinduism. He remained in this state of non-duality for six months, completely forgetting even his body. Thus Ramakrishna in his own experience again experienced a number of spiritual states, known during the three thousand years of history of Hinduism.

On the Path of Other Religions.

In his unquenchable thirst of God, Shri Ramakrishna crossed borders of Hinduism, went through the paths of Islam and Christianity, and in short time reached the highest realization in each of them. He venerated Jesus and Buddha as incarnations of God and held in high regard ten Guru of Sikh tradition. Shri Ramakrishna expressed the essence of his spiritual attainments during those twelve years in simple words: “Jato mat, tato path” – “How many religions, so many Paths”. Later he used to dwell in exalted states of consciousness and saw God in all beings.

Adoration of his spouse 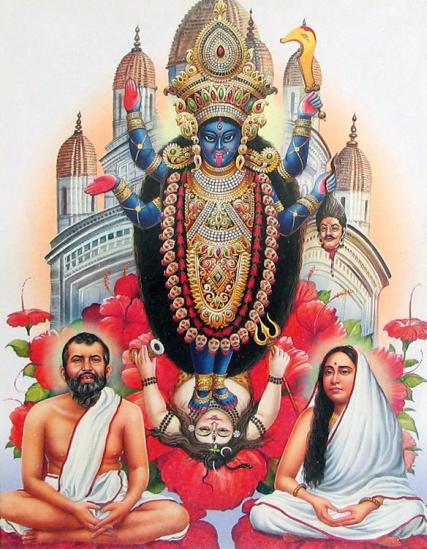 In 1872 his wife Sarada, who was nineteen at the time, travelled from her village to Dakshineshwar to see him. Ramakrishna gladly received her, thought how to perform duties of household and lead an intensive spiritual life at the same time. One night in his cell in Dakshineshwar temple he made worship to her as manifestation of the  Divine Mother. Even though Sarada remained to live near him, they were living in unstained purity and their marital relations were only of spiritual character. It should be noted that Shri Ramakrishna was an ordained sannyasin (monk in Hinduism) and observed all the basic commitments, which are taken by monks in pursuit of perfection. Outwardly he was living as a layman - a humble, loving and simple as a child. While Shri Ramakrishna was living in Dakshineshwar, first Rani Rasmani was taking care about him, but later, after her death, her in-law Mathur Nath Bishvas was doing the same.

Contacts with other great people.

The name of Shri Ramakrishna as enlightened saint started to become famous. Once Mathur organized a council of scientists, who stated that Shri Ramakrishna is not an ordinary being and announced him to be the Avatar of contemporary times. During those times there was a very popular socially-religious movement in Bengal, Brahmo Samaj, founded by Raja Ram Mohan Roy. Shri Ramakrishna met several leaders and members of Brahmo Samaj and had a great influence on them. His teaching about harmony of religions was attracting people of different confessions and Dakshineshwar became a genuine Parliament of religions.

Like a swarm of bees flock around a blooming flower, many devotees begun to gather around Shri Ramakrishna. He divided them into two groups. The first group were householders. Ramakrishna taught them how to reach God, while living in the world and performing family duties. The second, more significant division consisted of a group of young, educated people, on most part descendants of middle-class families in Bengal. He taught them as monks and those who could deliver the light of his message to all humanity. The most prominent among them were Narendranath, who later, under the name of Swami Vivekananda, brought the universal message of Vedanta to other parts of the world, inspired a new vitality in Hinduism and awakened the soul of India. 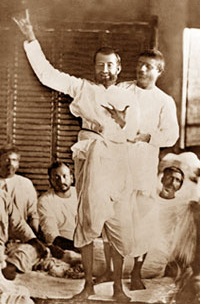 Sri Ramakrishna never wrote a book and did not make public speeches. He preferred to speak a simple language and as examples for him served parables and metaphors drawn from the observation of nature and of everyday life. The cultural elite of Bengal were attracted by his fascinating conversations. Many of those discussions were written down by his disciple Mahendranath Gupta, who later published them as a book in Bengal language with a name Shri Shri Ramakrishna Kathamrita. It was translated and published in English in 1942 under the name “Gospel of Shri Ramakrishna”. Over the time popularity of this book has grown and widespread, due to its universal message, very needed in the world.

Intensity of his spiritual life and tireless spiritual guidance to endless flow of spiritual seekers affected the health of Shri Ramakrishna. In 1885, he was diagnosed with throat cancer. He was taken to a spacious rancho outside the town, where his young disciples were caring for him days and nights. Ramakrishna inspired them to brotherly love and created the fundaments of the future monastic brotherhood, known as Ramakrishna Math. In August 16, 1886, soon after the midnight, Shri Ramakrishna left his physical body with the name of Divine Mother on his lips and departed into eternity.

The message of Shri Ramakrishna to contemporary world, which he carried out through all of his life and has reached us thanks to records of his talks preserved to our days, could be summarized in the following way:

-->The goal of human life is inquiry of the Ultimate Reality, which is the only one that can provide a full satisfaction and everlasting peace to a person. This is the essence of all religions.

--> The Ultimate Reality is One; it has both personal and impersonal aspects. It is named differently in different religions (God, Ishvara, etc.)

--> The Ultimate Reality can be reached by different paths, taught by world’s religions. All religions are true, because they lead to the same final Goal.

--> Purity of the Mind – is the most important condition to reach the Ultimate Reality; true purity – it is freedom from lust and greed. Observance of outward rules and rituals are secondary.

--> With spiritual practice a man can overpower his/her bad inclinations and divine grace is able to liberate even most hardened sinner. Therefore, one should not grieve about errors of the past, but develop a positive attitude towards life, relying on God.

--> Everybody can reach the God. There is no need for householders to renounce the world; they should pray sincerely and practice differentiation between the Eternal and transient reality and remain unattached. God hears sincere prayers. Intensive effort is the secret for success in spiritual life.

--> God is present in all people, but manifestations of this inner divinity are different for different people. In holy people God is manifesting more intensively. Women are a special manifestations of Universal Divine Mother, so women should be treated with respect.

--> Because God is present in all people, we should help to those in need not out of pity (which means indulgence), but as a humble service to the God.

--> Selfishness, created by ignorance, - is the main cause of all sufferings.

-> Life is the manifestation of the spontaneous creative power (Lila) of God. We should patiently endure all joy and pain, success and failure etc. – in all conditions the man should submit to God’s will.